The Love of Family

In a rural town in southern Senegal lives 5-year-old Awa, surrounded by her loving family. She has always been close with them — especially with her Uncle Woury. Since the moment Awa was born with a cleft lip, her uncle’s greatest wish was that she would someday find healing. 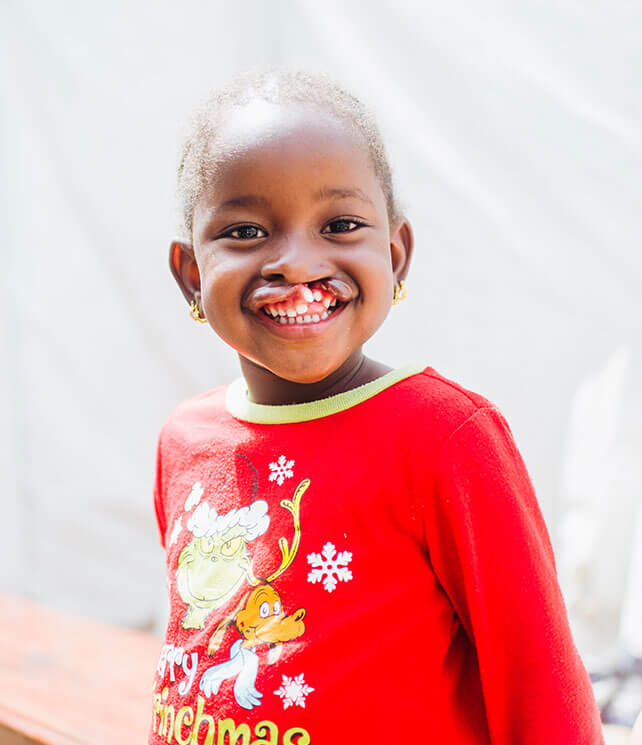 In a rural town in southern Senegal lives 5-year-old Awa, surrounded by her loving family. She has always been close with them — especially with her Uncle Woury. Since the moment Awa was born with a cleft lip, her uncle’s greatest wish was that she would someday find healing.

Woury was there the day Awa was born. Awa’s mother, Rougui, was scared when she first saw her daughter, not knowing what the cleft lip would mean for her future. In the weeks following the birth, Woury invited them to stay with him so he could support his sister during this difficult time.

As Awa grew up in her village, she encountered the hardships of living with a cleft lip.

“People in my village did not cast her out, but they laughed at her, and she was ashamed,” Rougui shared. “She used to hide her mouth with her hand.”

Both Awa’s parents and her uncle kept looking for an answer to their prayers, but they couldn’t see any solution in their future.

One day, everything changed. Woury heard that Mercy Ships was bringing a hospital ship to provide free surgery in Senegal. He immediately thought of Awa and told Rougui,

“Run, run, run to Dakar! These people will help her and fix her smile. People will not even recognize Awa after!”

Rougui chose to follow his advice, despite her own doubts. Awa received an appointment for her surgery in 2019, but her surgery was postponed due to the COVID-19 pandemic. It was her uncle who stayed in touch with Mercy Ships throughout the pandemic, reminding Rougui to hold onto hope as the months passed.

In an unexpected tragedy, Woury passed away a few months before Mercy Ships returned to Senegal in early 2022. Rougui decided to honor her brother’s last wish. She and Awa made the long journey to the Africa Mercy, where Woury’s hope was finally realized and Awa received surgery to repair her cleft lip.

The weeks spent on board the Africa Mercy were an emotional time for Rougui. She felt anxious as Awa made her way into the operating room on the day of her surgery. The volunteer nurses noticed this, leading one of them to ask if Rougui could have a little look inside the OR to calm her nerves. Just after her daughter’s operation, Rougui was invited into the room where Awa had received her life-changing surgery. As soon as Rougui entered, the emotions from her years of waiting came pouring out:

“I cried because I saw my daughter and it was such a joy because only God can do this,” she shared. “I cannot say that you can create a person, but to me, you have recreated my daughter and her future.”

During Awa’s recovery, Rougui couldn’t stop reminiscing about the last time she had visited a hospital.

“On the day of our discharge from the Africa Mercy, I thought of many things,” she said. “The last time Awa and I left a hospital, it was the day she was born, and she had a cleft lip. Everything is different now. She is healed, we have been well cared for, and we get to go home together. It is a great joy, this day!”

With her cleft lip fully healed, Awa and Rougui made the long journey back to their home in southern Senegal, where Awa’s father was awaiting them with a big smile. Upon seeing his daughter, tears sprang to his eyes.

“If her Uncle Woury would have been alive and he had seen her now, he would have been so happy. He would say that God did what he had always hoped for. And he would spend the rest of the day playing with Awa.”

While Woury is unable to see his dream come true, thanks to his love and perseverance, his legacy will live on in his niece’s beautiful smile.

Thanks to friends like you, Awa received a life-changing surgery on board the Africa Mercy.